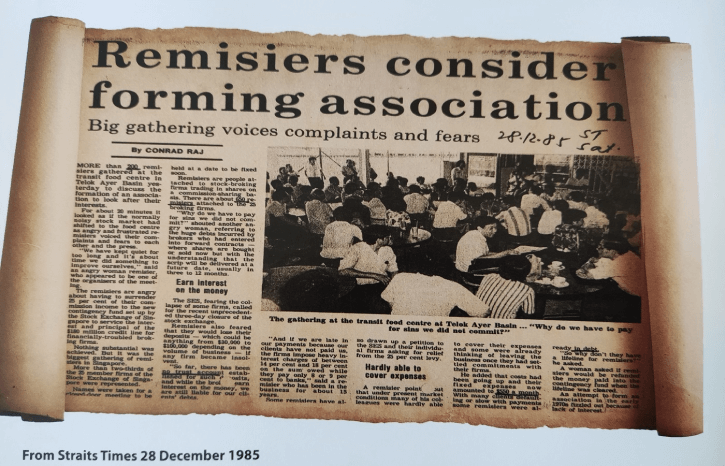 History of The Society of Remisiers (Singapore)

Who is a ‘Remisier’?

The word ‘remisier” is not found in any English dictionary. It is a French word meaning “intermediary”. Although remisiers are still a feature of Paris Bourse, the term has been commonly used in the context of Bursa Malaysia and the Singapore Exchange. A remisier is an agent of a stockbroking company and receives a share of the commission for each transaction he handled. In the Singapore context, a remisier is licensed trading representative who is attached to a SGX member securities firms and who receives about 40% of the commission. Until the mid-1970, the sharing was 50%.

Remisiers first appeared in this region during the colonial period in Malaya (comprising of the Crown Colonies of Malacca, Penang, Singapore, Federated Malay States and Unfederated Malay States), where they dealt primarily in rubber and tin-related companies that were listed on London Stock Exchange (LSE), on behalf of Malaya-based clients. They worked with pioneer stockbroking firms such as Fraser & Company, Lyall &Evatt and J.M. Sassoon.

Relationship between Remisiers and Stockbroking Companies

The relationship between remisiers and their stockbroking companies were originally based on very loose arrangements which varied substantially both within the industry at large and within each company.

As the industry progressed, more people joined as remisiers, and the regulatory body implemented standard remisier agreements. Under these standard agreements, the remisier is regarded as agent of the stockbroking company. This relationship was not made explicit in the previous arrangements between remisiers and stockbrokers. Now, each remisier had to put up a deposit to cover his clients’ losses in the event of default. The deposits vary from $30,000 upwards depending on the remisier’s volume of business.

In 1973, the remisiers’ share of commission rate was cut from 50% of gross commission to 40%. This created a lot of unhappiness which resulted in the formation of the first Association of Remisiers. This Association lasted only a few years due to lack of support from remisiers and discouragement from stockbroking companies.

The Pan-Electric crisis erupted in late 1985 and this led to the closure of the stock market for 3 days. A few stockbroking companies ran into financial difficulties. To calm the market, the authorities started a Lifeboat Fund to bail out ailing stockbroking companies. All remisiers had to contribute 25% of their nett commissions to the Fund. There was another outcry by the remisiers.

The Pan-Electric crisis erupted in late 1985 and this led to the closure of the stock market for 3 days. A few stockbroking companies ran into financial difficulties. To calm the market, the authorities started a Lifeboat Fund to bail out ailing stockbroking companies. All remisiers had to contribute 25% of their nett commissions to the Fund. There was another outcry by the remisiers. On 27 December 1985, more than 200 remisiers gathered at the transit food centre next to Lau Pa Sat. It was the biggest gathering of remisiers in Singapore thus far, and they were there to voice their dissatisfaction and to consider forming an association. Nothing substantial was achieved but names were collected for a closed-door meeting to be held later.

Birth of the Society

A pro-tem committee, chaired by Mr Lee Wee Seng was later formed during a meeting at the Metropolitan YMCA at Palmer Road. This led to the formation of The Society of Remisiers (Singapore). The pro-tem committee held a meeting with the Monetary Authority of Singapore (MAS) and discussed, among other issues, the main unhappiness the remisiers had over the Lifeboat Fund. Soon after, the requirement for remisier’s contribution to this fund ceased.

In the beginning, the Society held regular bi-monthly meetings with the then Stock Exchange of Singapore (SES). Various grievances were brought for discussions and some actions were taken. One notable example was the reduction of hefty transfer fee to $2,000 per transfer which was $4,000 for the 1st instance and doubling up for each and subsequent transfer to a maximum of $32,000.